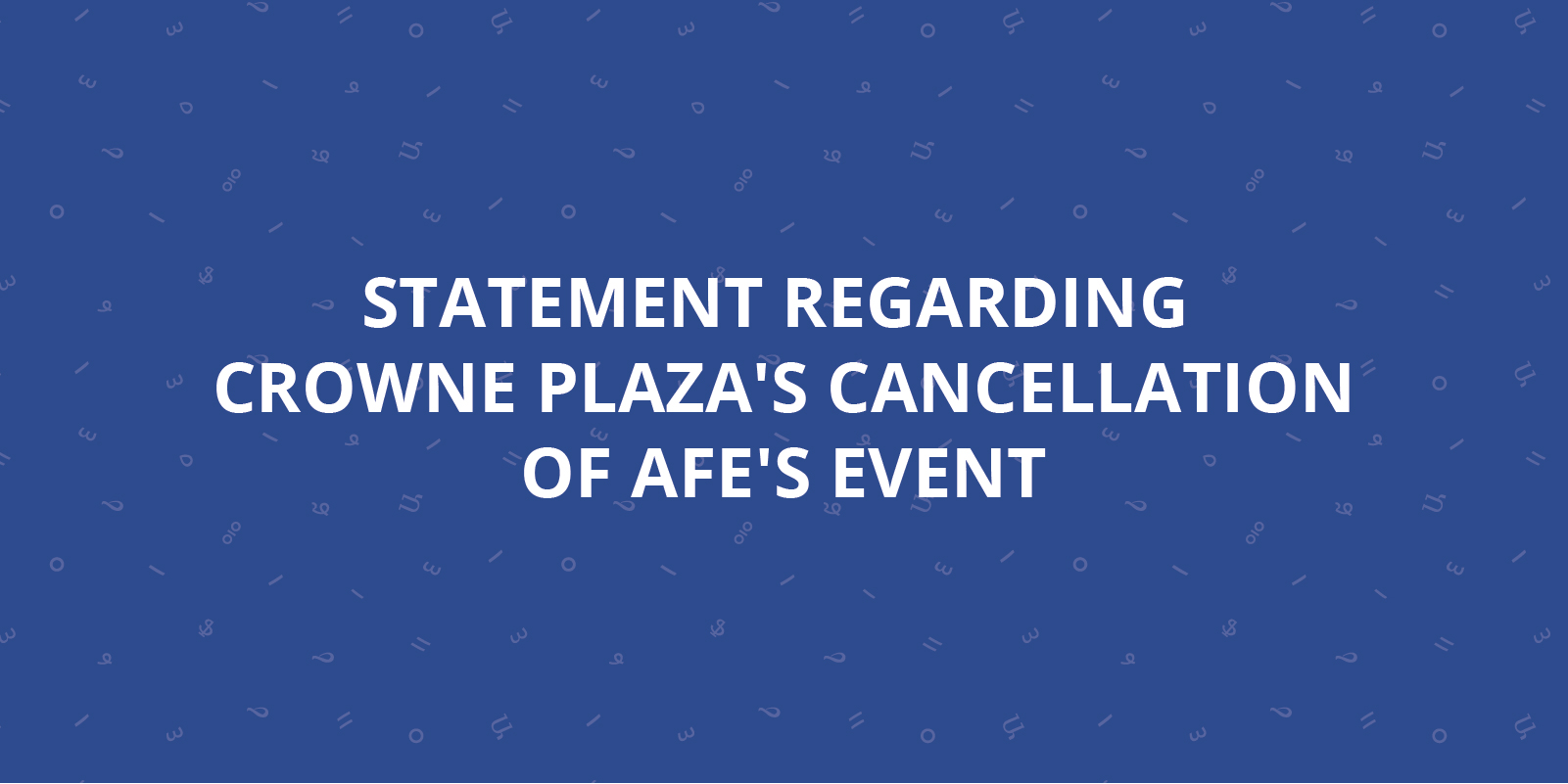 On Friday, May 26, 2017, the Crowne Plaza Beirut Hotel, in an unprofessional act based on discrimination and against all international standards Intercontinental Hotels Group (IHG) members should abide by, decided to cancel the event organized by the Arab Foundation of Freedoms and Equality (AFE), expected to take place between June 8 and June 16, 2017.

On Wednesday May 17, 2017, based on a signed contract between The Arab Foundation for Freedoms and Equality (AFE) and the Crowne Plaza Beirut hotel, AFE had reserved a meeting space at the abovementioned hotel for an eight-day workshop on “Media Literacy and Strategic planning.” The event was organized to be attended by 20 human right activists from across the Middle-East and North Africa region. The contract was signed and approved by Crowne Plaza Beirut and AFE representatives. A few days later, the hotel’s management reached out to AFE requesting that the event be “postponed till after the month of Ramadan” citing concerns that the workshop might “irritate certain people” given AFE’s public endorsement of Lebanese LGBTQ rights group Helem and its campaign on its Facebook page. Noting that the workshop organized by AFE was not publicly advertised for, nor was it related to LGBTQ rights, Crowne Plaza’s concern was deemed surprising and suspicious with no credible basis for the management’s claims. Changing the dates of a regional workshop, after all plane tickets have been booked and all participants had been notified of travel dates and venue was not a conceivable option against Crowne Plaza’s claims. AFE had to refuse changing the dates of its workshop.

Consequently, on Thursday May 25, against all acceptable professional practices of international chains and against all legal texts that safeguard freedom of speech and assembly in Lebanon, the Crowne Plaza’s sales manager requested AFE to provide her with workshop’s agenda. Disregarding the seriousness of this unprecedented breach of professional and privacy standards and AFE’s strong belief that the request wasn’t rightful nor was it a standard practice for the Crowne Plaza or any other reputable hotel, and to insure the success of its event, AFE responded positively to the sales manager’s request. However, this was not enough. The next day, AFE was informed by the hotel’s management that its reservation has been canceled and the signed contract has been voided, alleging that members of the Lebanese Authorities had called the hotel and asked them to cancel our reservation. When AFE inquired more details about the Lebanese Authorities’ interference and questioned the validity of the hotel’s statement, its request was met with silence and refusal to share any additional information.

Despite lacking any valid reason, evidence, or plausible cause for concern, the Crowne Plaza’s management has taken active steps to impede the important work of AFE because of its social empowerment and support of human rights causes and freedom values in Lebanon. This incident is considered to be an unprecedented and alarming escalation in the latest string of attempts from government and extremist religious sources in Lebanon to suppress the work of Lebanese civil society institutions. What is more concerning is that these non-rightful practices were supported by the full complicity of a private hotel that belongs to an international chain, which decided to penalize AFE for its support of equality, human right values and other organizations in Lebanon.

By discriminating against a registered, legal and well-reputed organization without any valid or proof and without compensation, the Crowne Plaza Beirut hotel has failed to live up to its own corporate values and ethical business practices. We consider the cancellation of our workshop to be unethical, unwarranted, and unsubstantiated. In addition, given the current context and the explanation provided by the hotel, we can only conclude that what transpired was a direct result of the discriminatory prejudiced, and homophobic business policies practiced by the Crowne Plaza Beirut management.

To date, the management has yet to publicly address its actions or provide a convincing and truthful explanation for its decision.

As a result, AFE has initiated a public boycott campaign against the Crowne Plaza Beirut hotel and its affiliates until a public explanation and apology is issued. AFE stands with the rest of Lebanese civil society in protesting and resisting these attempts at suppressing freedom of speech, expression, and assembly in Lebanon.

Following the media campaign launched by The Arab Foundation for Freedoms and Equality (AFE) to boycott Crowne Plaza Beirut Hotel, AFE was contact by Intercontinental Hotels Group (IHG)’s regional office. Unfortunately, during a phone call with IHG regional manager Michael Koth, he considered Crowne Plaza Beirut’s allegations to be rightful and that Lebanese authorities contacted the hotel requiring the cancellation of the event because “it was too dangerous to hold a workshop in Hamra street in Beirut during the month of Ramadan.”