Over the past few years, the MENA region has seen much advancement in terms of the involvement and presence of movements that defend Gender and Bodily Health and Rights in localities that are defined as high risk for programming. These advancements in the movement have been accompanied by many repercussions, Gender and Bodily Rights activists continue to be imprisoned and abused in numerous countries in the region, some have been killed, many have “disappeared,” while others have been forced to flee into exile where they continue to advocate for human rights for the MENA region. Less dramatic but no less dire, is the situation of those who suffer dismissal from work, restrictions on movement and travel, threats against themselves and their families, and other forms of daily harassment. Most activists live and work in localities where governmental control and restrictive NGO laws act as a Damocles’ sword over their heads.

One particular target of governmental criticism has been the near-total reliance on Western-based funding due to the dearth in domestic and regional financial support for human rights activities. Yet the policies of these very governments, who themselves engage in bilateral partnerships through similar funding streams, make reliance on foreign funding inevitable. In the countries where there is a margin of spare wealth, laws make it difficult to raise funds without express governmental permission and in most countries potential contributors can have no tax advantages. Finally, fear resulting from the perceived political nature of gender and bodily rights work seriously affects voluntary contributions by other sectors such as private business and traditional media.

Few domestic/regional donor agencies work towards the building of assets to enable civil society actors to fundamentally address problems at their roots in a sustained manner. If the non-profit activity is perceived as political, as human rights inevitably are, the potential to find indigenous sources of funding falls to near zero. It is far easier to find donors to support the restoration of historic property or to build a new orphanage than it is to locate donors to support Gender and Bodily Rights work.

The foregoing lies behind the establishment of AFE’s grant-making system, a regional human rights organization managed and sustained by activists from the region with the requisite expertise, skills and commitment to promote Gender and Bodily Rights in the MENA. The grant-making process aims to support the Gender and Bodily Rights priorities identified by those working in the region through as participatory and inclusive a process as possible.

AFE actively encourages projects that develop new ideas or that take advantage of new opportunities, including: research, coalition building, the emergence of previously excluded communities, the relaxation of government restrictions in a particular country, increased public engagement and demands for respect for Gender and Bodily Rights, awareness raising and other developments that provide defenders with a chance to move Gender and Bodily Rights forward in the Middle East and North Africa Region.

AFE’s grant making will look positively at projects adopting one or more of the following strategic approaches:

AFE currently manages and awards grants through the following mechanisms:

AFE’s peer select grants aim to support new actors and nascent groups who program for Gender and Bodily Rights across the region, to gain access to flexible, core support grants. Core Support Grants usually have a budget range of 5,000 USD – 50,000 USD per a 12 months-timespan. Official registration does not affect the funding decision. Cycles are announced annually for targeted localities. 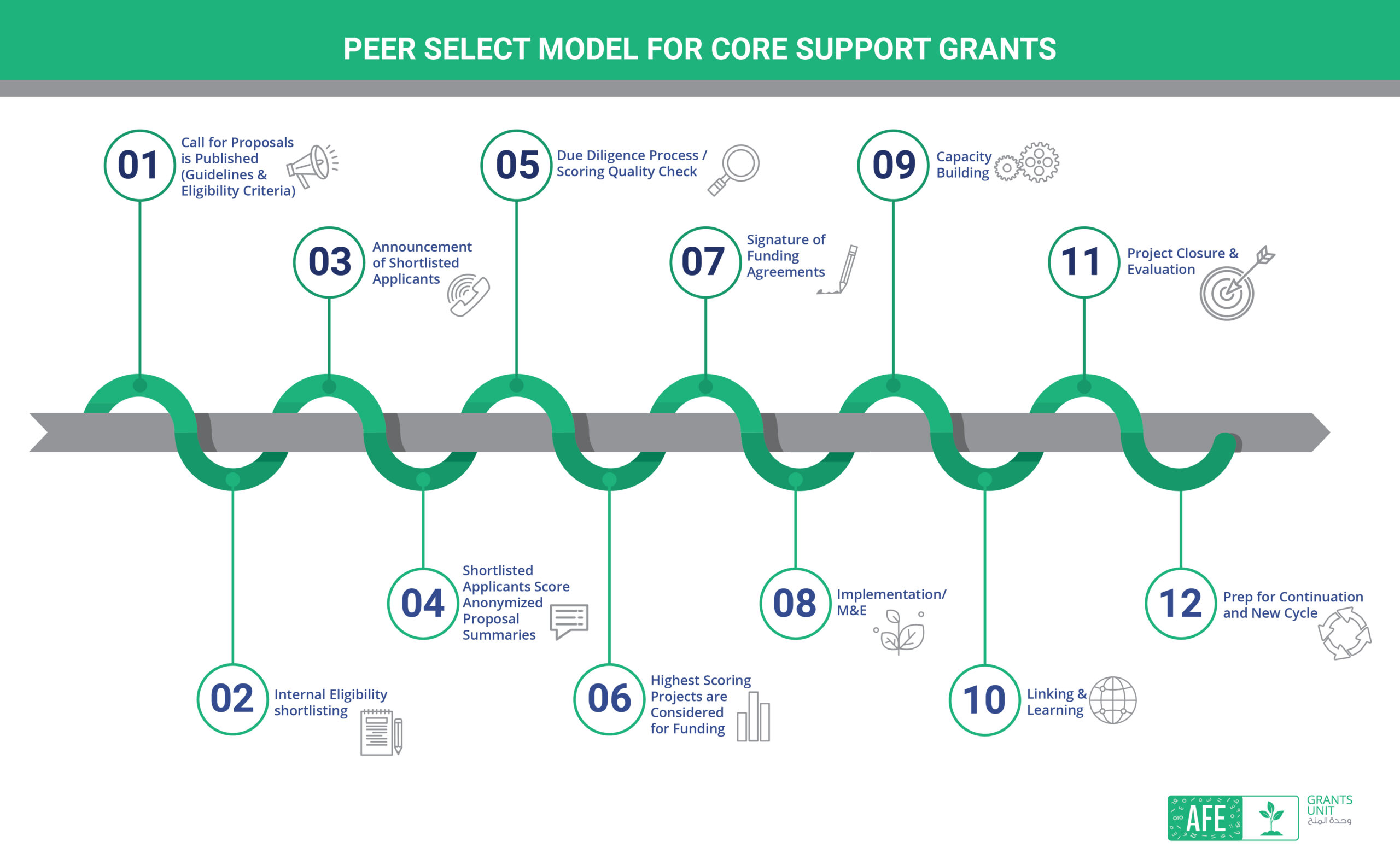 The aim of the Peer Select grant-making mechanism is to shift the power into the hands of the communities with the lived experiences, in doing so, the decisions made will be well informed and contextually relevant to the needs of the actors on the ground.

Priority is given to:

Small, emerging grassroots groups with little or no access to funding from larger donors;

You are not eligible if you are:

AFE uses a participatory grant-making approach. Community activists from the MENA region, organized in a Regional Grants Committee, are at the center of AFE’s Project Grants. They ensure that the allocated funding addresses community needs and contributes to real and relevant social and policy change through advocacy and movement building, moreover, a peer select methodology will identify which of the shortlisted proposals are selected for funding. 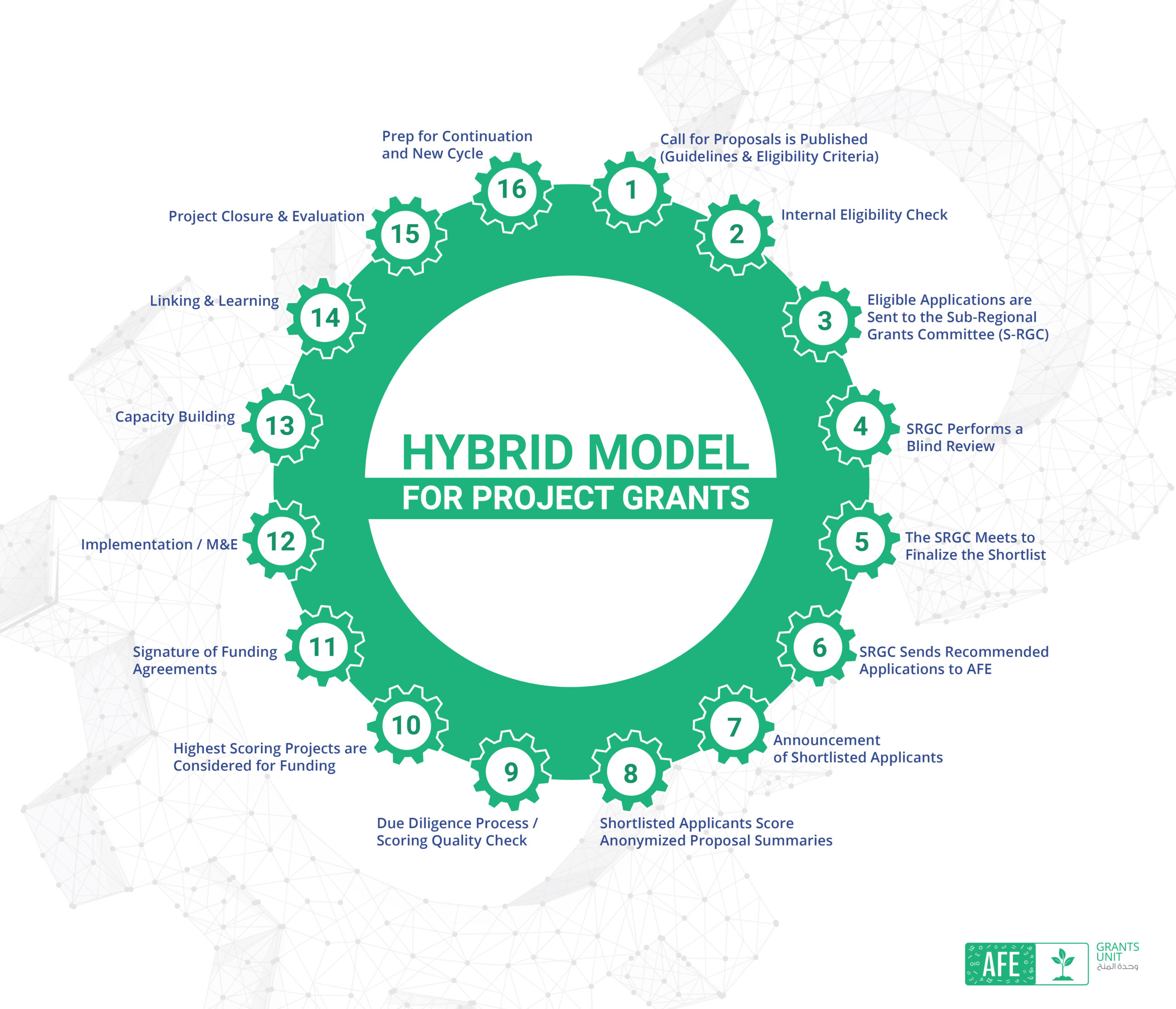 AFE’s Innovation Fund is directed at groups and individuals using creative and innovative strategies to further their activism for Gender and Bodily Rights in the MENA Region (including art, music, culture, poetry, social media, feminist activist driven research etc.). Innovation Funds are thematic grants, they can be targeted or competitive, and may be managed through either of the above-listed mechanisms; specific process information for applying to Innovation Fund Grants is posted with the Call for Proposals when launched.

Strategic Grants are targeted, non-competitive grants AFE awards to expert CSOs and groups across the region based on track record and geographical scope, to implement relevant programmatic elements. Strategic grants are flexible in size and duration.

Masarouna is a strategic partnership between the Arab Foundation for Freedoms and Equality (AFE), RNW Media and Oxfam Novib who is the Administrative Lead; the program is funded by the Dutch Ministry of Foreign Affairs. AFE is responsible for the participatory grant-making for advocacy on sexual and reproductive health and rights (SRHR) for young people with various gender expressions in 6 countries across MENA region: Egypt, Tunisia, Lebanon, Jordan, Iraq and OPT.

Learn the latest news by signing up to our newsletter. Subscribe