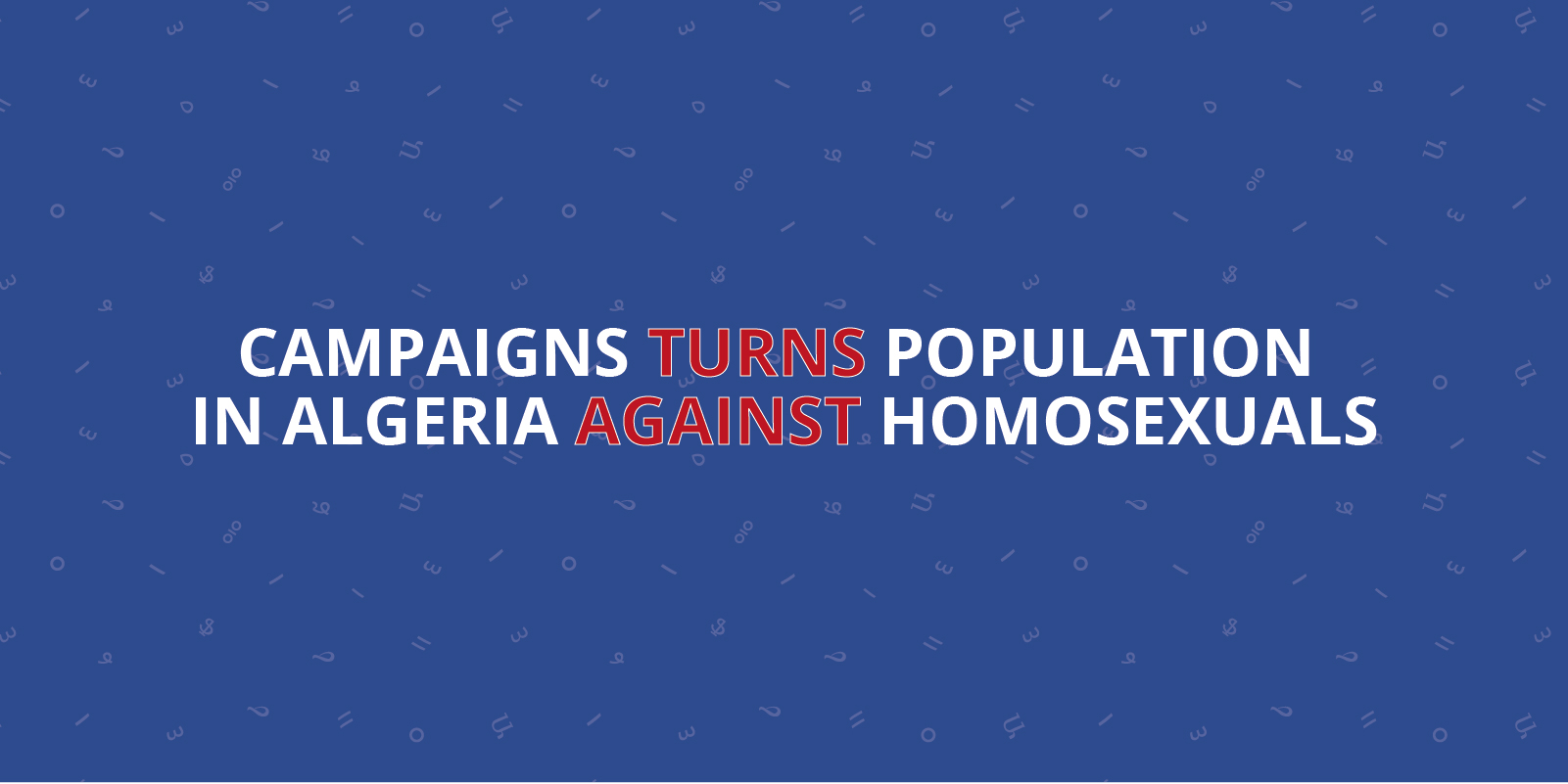 For long, homosexuality in Algeria was faced with utter silence and denial. It was a well-kept secret swiftly swept under the carpet never emerging to the public surface. But in the past few years, authorities in this conservative country have decided to unleash the rage of the profoundly homophobic society against gays, according to a local LGBTQ activist.

Zoheir Djazeiri, who uses a pseudonym for fear of retribution, said that a series of widely defused TV reports attacking homosexuals and describing them as “sick criminals” has raised fears within the LGBTQ community.

“More and more people are hiding their sexual identity and refraining from behavior that might signal that they are gay,” said Djazeiri. “There is a state of panic.”

Even though authorities do not seem to be actively going after LGBTQ individuals and arresting them, LGBTQ individuals in Algeria are afraid of being socially ostracized, being rejected from their families and friends and losing their jobs in case they are outed.

TV programs aired earlier this year on Hogar TV, a private TV channel, and posted on YouTube have described homosexuals in Algeria as “devil worshippers.” The programs described the phenomenon of homosexuality as a “disgusting deviance” imported from the west. They conducted extensive interviews with people on the streets of Algiers to reflect the degree of condemnation against homosexuality among the Algerian society.

Djazeiri said authorities have been behind these media campaigns that appeared on government-supported media. TV stations in Algeria are all dominated by influential figures in the government.  He said that the strategy of the government is not to officially crack down on homosexuals, which could attract condemnation from international rights organizations and European Union instances.

“It is less costly to turn the population against us because they know that people will respond,” said Djazeiri, who was the target of a media campaign that tried to tarnish his reputation last year.

These hate campaigns have prompted Abu Nawas and Alwan, the two LGBTQ rights groups operating in Algeria -albeit in secrecy-, to completely suspend their activities. Djazeiri said that some of his colleagues have already left the country and were granted asylum in Europe.

Recently, the minister of religious affairs

would wage a war against those who support homosexuality and in turn are causing “moral decadence and the destruction of the family.” He said that this battle had priority over the battle against the ideology of extremists like ISIS.

It remains unclear what the minister meant by the war against homosexuals.

Djazeiri said that the purpose behind these media campaigns is to deviate attention from rightful demands for social and political change due to concerns that the Arab spring wave of protests would eventually reach Algeria.

He added that LGBTQ groups have no allies in Algeria today because defenders of human rights either don’t recognize them as a community that deserves to be protected or because they fear that supporting homosexuality would jeopardize their already vulnerable position.

How does this climate of fear affect online communications among homosexuals and online advocacy and networking in Algeria?

Djazeiri said that the government has invested in expensive equipment officially to combat so-called cyber crimes. “Even though they say, they use monitoring tools against pedophilia and other legitimate cyber crimes, we feel that they are used to watch over activists, and notably LGBTQ ones.”

What about chats among regular gay people?

Djzaeiri said that dating apps remain a popular means for chat and encounters. “So far, authorities have not tried to arrest people through these apps like is the case in Egypt,” he said. “But before, more people dared to show their faces. Now they are afraid to do so. They show a body part or a neutral picture instead.”

It is difficult to assess whether homophobic media campaigns have led to a surge in hate crimes against homosexuals or increased the instances of blackmail. Djazeiri said that such cases when they happen remain unreported. “People fear going to the police if they are aggressed because of their sexuality. They would be arrested because homosexuality is illegal.”

Homosexuality is punishable by law in Algeria for up to two years in prison and a hefty fine.

Djazeiri said that there are more and more online commentaries and Facebook pages that propagate hateful messages against homosexuals described as “degenerates” and “sick”.

These messages usually claim that homosexuality is imported from the west to harm Algerian traditions and that homosexuals trap children to sleep with them.

“We actively ask Facebook officials to shut down such pages. Sometimes they respond but other times, they tell us that the page does not contradict with the values of the social network.”